‹  Home  ›  Latest news  › Bike review: Putting the sport back into the Harley-Davidson sportster 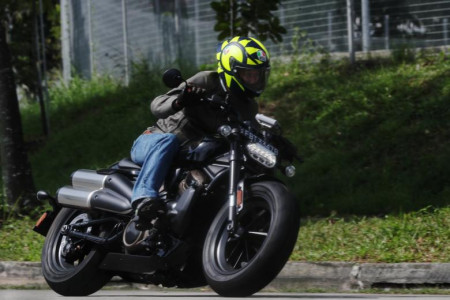 SINGAPORE - In the past, if you told friends you rode a Harley-Davidson Sportster, they would think you had a motorcycle that was smaller, saner or slower.

The 2022 Sportster S - equipped with the American marque's latest engine, the Revolution Max 1250T ("T" for torque) - is a show-stopper that has brought the "sport" back to the Sportster.

This Harley is more likely to steal the show when pulling away from the lights or propelling out of medium-speed turns - thanks to its abundance of torque.

The 1,252cc twin-cylinder motorcycle is low-slung, with features that are both contemporary and continental. Its re-tuned engine is the same one on the Harley dual-purpose Pan America 1250.

And like its sibling in the Sportster range, the Forty-Eight, the Sportster S has a fat front tyre and an 11.8-litre peanut tank.

New handlebar controls allow for hassle-free selection of riding aids, which appear on a 4-inch round digital dashboard. But with the sun overhead, you are unlikely to be able to read the gauges.

Looks aside, all the excitement stems from its lighter body, lively engine and high-tech riding aids.

The bike has a dry weight of about 227kg - at least 20kg lighter than the Sportster Forty-Eight, partly because its engine also acts as a stressed member of the frame.

With an engine that spits out 121bhp and 127Nm of torque, it unleashes instant acceleration easily, hitting 100kmh in about 5 seconds and a top speed of more than 200kmh - compared with about 6 seconds and 177kmh clocked by the Forty-Eight.

The Sportster S has three ride modes (Rain, Road and Sport) as well as a custom mode which allows adjustability for traction, cornering anti-lock brakes and power delivery.

In Sport mode (my favourite), the torque punch comes in at about 3,500rpm, which is helpful for street riding.

Between 4,000rpm and 7,000rpm, the acceleration is smooth yet aggressive, requiring you to grip the fuel tank tightly with your knees.

Cruising in sixth gear, the speedometer reads 90kmh with 3,000rpm showing on the rev counter.

The Sportster S lunges forward effortlessly at every turn, accompanied by the sound of scrapping footpegs and exhaust pipe "burps" when the throttle is cut in lower gears.

However, getting the bike to turn into bends requires some commitment and elbow grease because of its fat front tyre, which also makes its presence felt in slow-speed manoeuvres.

The side-mounted handlebar mirrors discourage me from squeezing between vehicles.

While the front and rear suspension are fully adjustable, the standard settings are too stiff for my 70kg frame, requiring some tweaking to mellow the suspension movements.

With the hard single seat, taking the bike on longer rides requires some endurance. After about an hour, my calves ached.

Taller riders will find their knees coming into contact with the edge of the handlebar during tight U-turns.