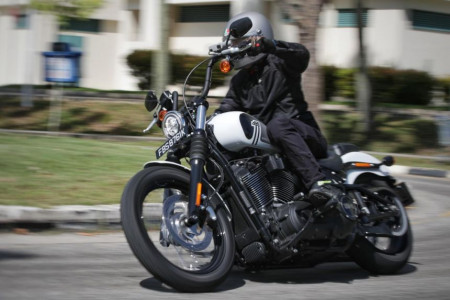 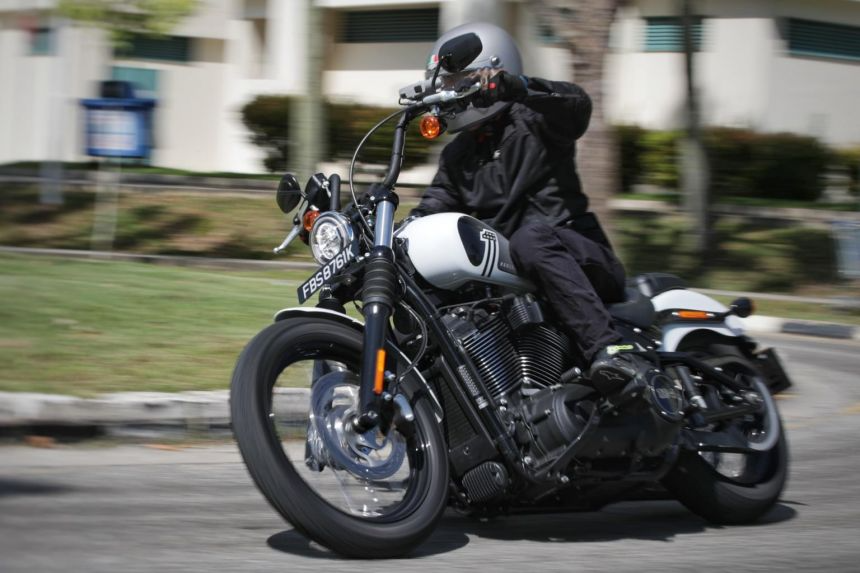 While his kick-start Harley looks cool - it has long forks, ape hangers, rear brakes and a peanut fuel tank - I cannot imagine riding it in city traffic.

With the 1,868cc twin-cylinder Street Bob, you can. It revives some of Harley's past styling cues - with its wrinkled black, mid-ape hanger handlebars, rubber garter fork protectors and laced wheels. But as its name suggests, it is made for the streets.

Instead of forward controls, the six-speed torque puncher - it makes a massive 155Nm at 3,250rpm - has its foot controls directly below its air cleaner.

By being closer to the rider's sitting position, the controls give the motorcycle more agility and better handling, so you can wriggle your way out of congestion effortlessly.

But be mindful of the handlebars - they are about the height of the side mirrors of some sport utility vehicles.

The current Street Bob, previously produced in a Dyna frame with its dual rear shocks exposed, has gone Softail. Its suspension is hidden under the seat, giving the motorcycle a cleaner silhouette.

I appreciate the bike's simplicity and there is a touch of class on its non-slip quilted seats. Its 13.2-litre fuel tank has a screw-on cap without a locking mechanism. The engine and exhaust pipes are painted black.

Other than anti-lock brakes, there are no complex electronic aids. To the left of the handlebar are a self-cancelling turn signal, a high-beam button and a button which allows you to navigate the small dashboard on the riser. Instead of seeing all your gauges, you need to make selections for range, RPM, low fuel and so on.

The Street Bob may look a little naked. But like all Harleys, you can customise with frills like forward controls, saddle bags and chrome trimmings. Perhaps the bells and whistles are less important for a biker looking for a serious and punchy ride. 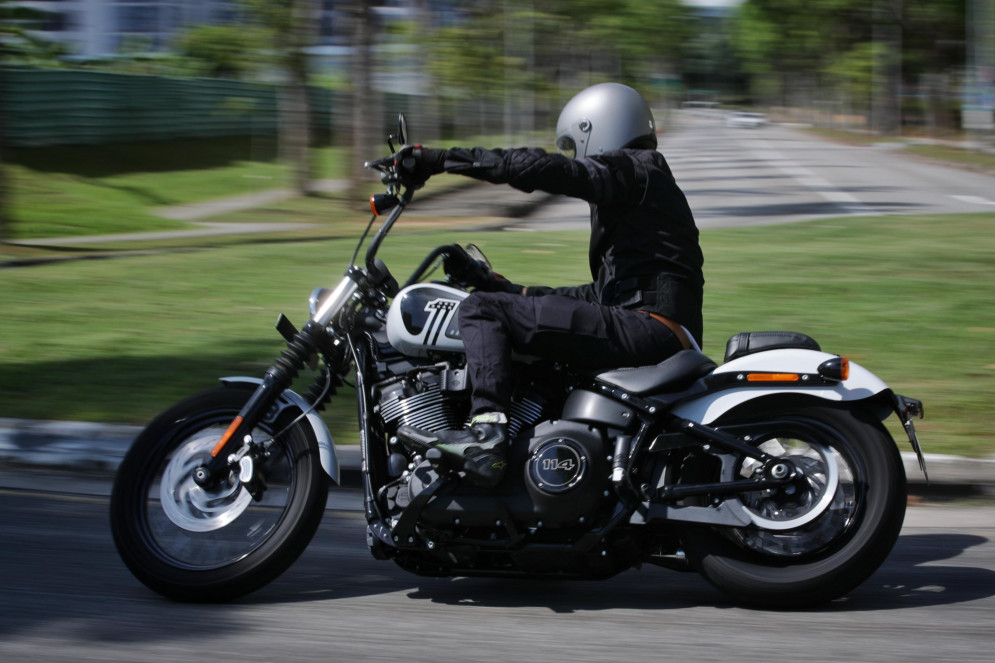 The current Street Bob's suspension is hidden under the seat, giving the motorcycle a cleaner silhouette. ST PHOTO: GIN TAY

While Harley does not display horsepower numbers, its torque figure gives some indication of its performance.

The bike sprints from 0 to 100kmh in about 5.3 seconds and has a top speed of just under 200kmh. For something tipping the scales at 299kg, the numbers are respectable. Plus, you can pull away from the lights ahead of most other vehicles.

The Harley's real-world advantage, whether in the city or on long adventures, is its ability to accelerate quickly without downshifting - thanks to its abundance of torque in the lower rev range.

The bike attains 90kmh in sixth gear, with the tacho at a relaxed 2,000rpm.

The suspension is plush. If you charge into turns aggressively, you will hear the sound of foot pegs and maybe even the lower exhaust pipe grazing the tarmac.

Both left and right lean angles are set at 28.5 degrees. The front brake lever requires a generous squeeze before you come to a stop.

The Street Bob's taller handlebars are a blessing for long-armed riders like me. I feel relaxed riding this bike. But with my hands higher up, the headwinds bash my torso as the bike speeds up. So take it easy and keep within speed limits.