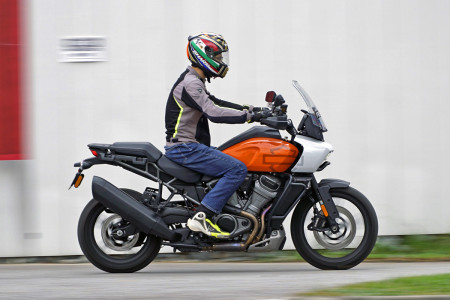 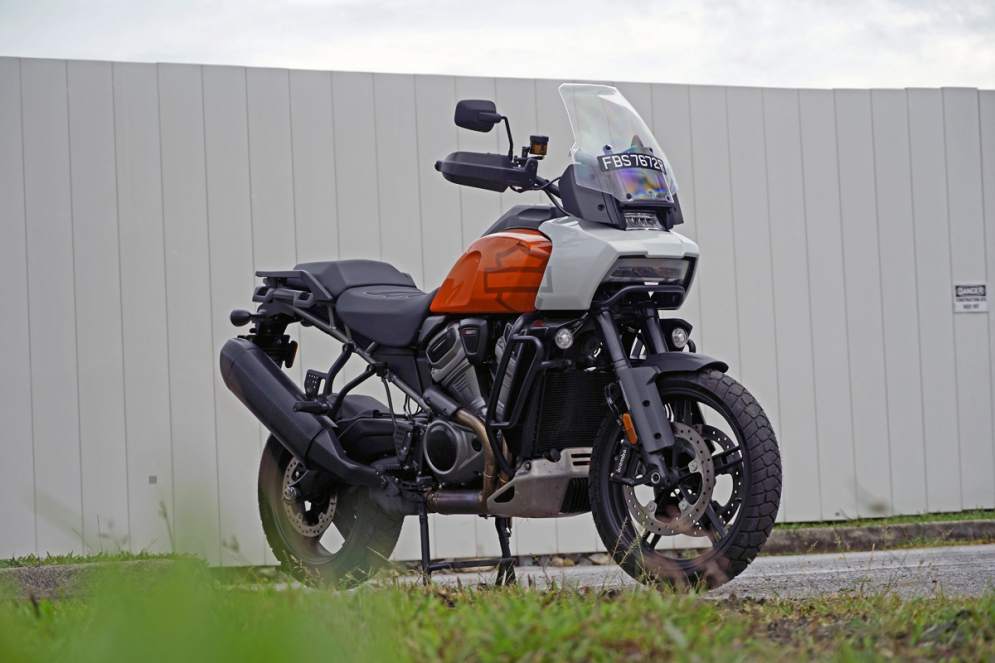 The Pan America is Harley-Davidson’s first ever adventure motorcycle, but if you rode it badge-unseen, you probably wouldn’t be able to tell. When James Brown sings about the ‘no destination too far’ feel in his hit, the Pan Am sums up that feeling perfectly. 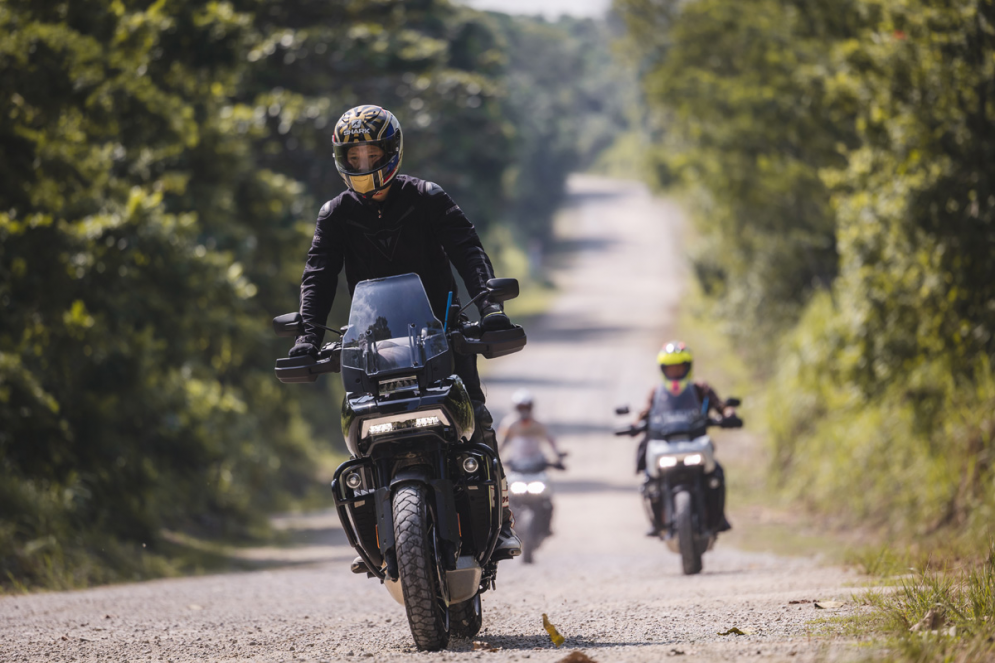 For a full background and info on the bike’s launch in Singapore in August 2021, read our report that also covers a brief off-road jaunt with the bike.

A few weeks on, we finally got our hands on the Harley-Davidson Pan America 1250 Special for a few days to experience living with it, and more importantly, to have a sense of how it compares with the competition, in particular the clear segment leader/progenitor, the BMW R 1250 GS. 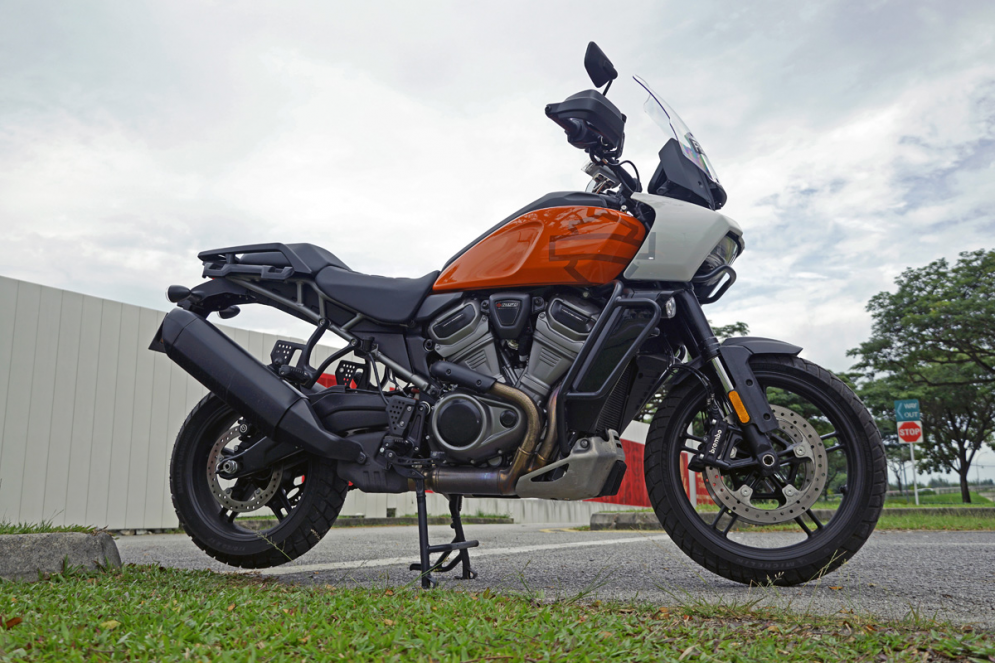 Predictably, the Pan America 1250 Special comes feature packed with everything the competition has to offer, including:

On paper it looks mighty impressive, but what’s it like on the road in real life? 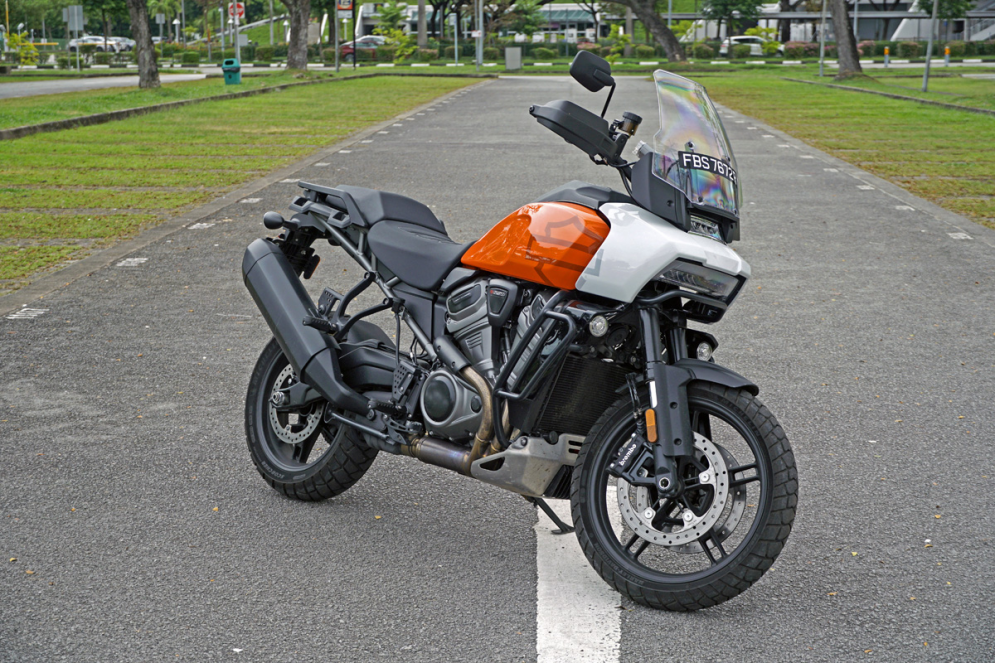 We’ll address the most conspicuous issue first: The styling. We applaud Harley for going its own route in the adventure class (ha) since the Pan Am doesn’t look like any other adventure bike around. On one hand you can call it unique, chunky, tough-looking, and presence-full in the same way a Jeep is, but on the other you’d also never call it lithe or sporty. It’s very American, for better or worse. 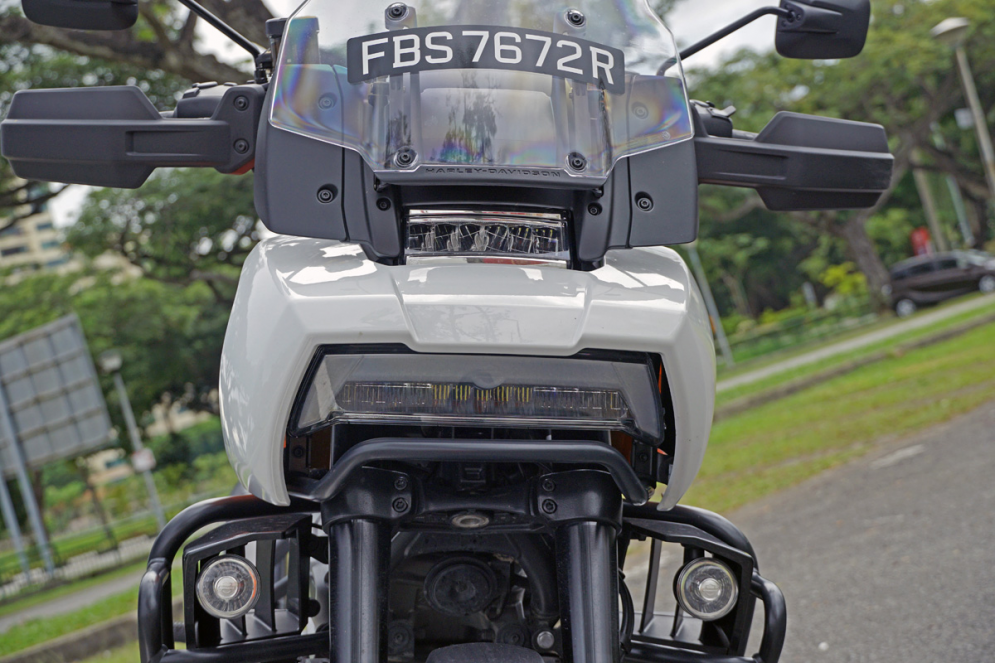 An American positive is that the Pan Am gives you every doodad you can think of. As explained in our news launch story, there’s the regular S$46,900 Pan America 1250, and the S$56,900 Pan American 1250 Special, which is tested here. 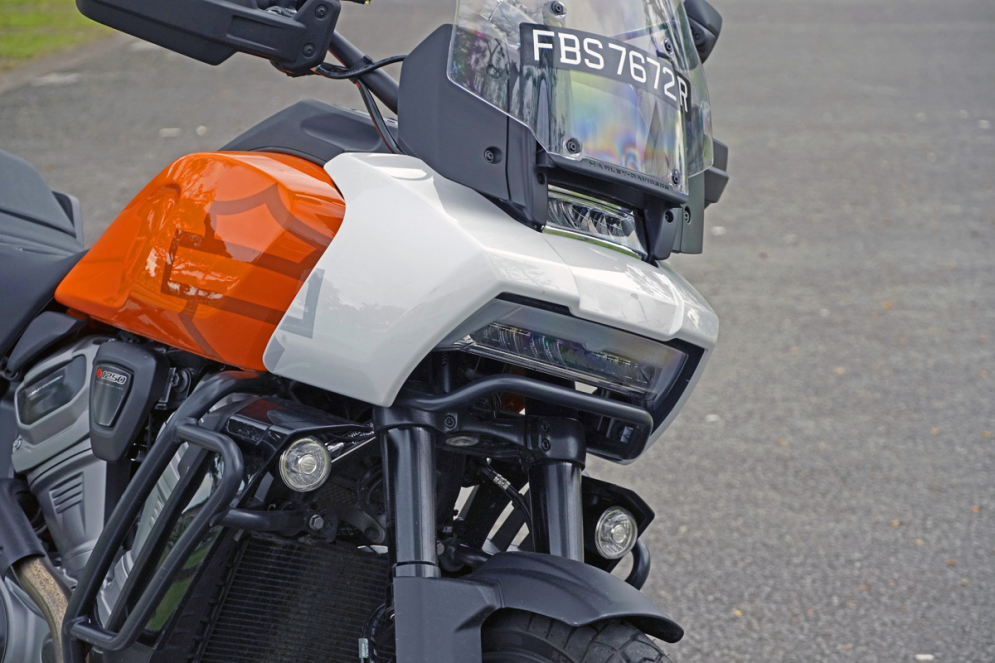 Harley has also made a noticeable step up in quality, with the Pan Am on par with most adventure bikes, and a clear departure from the chrome-fests of yore with crude, burly unadjustable controls of old.

But to match that big image and feature list, the Pan Am definitely not a small machine. At 250kg it has the potential to make you end up living with a hernia, but any buyer looking at a litre-plus adventure bike will face ‘massive’ problems anyway. The R 1250 GS is a similar weight, but its ‘magic trick’ of a low centre of gravity is what makes it easy to deal with. 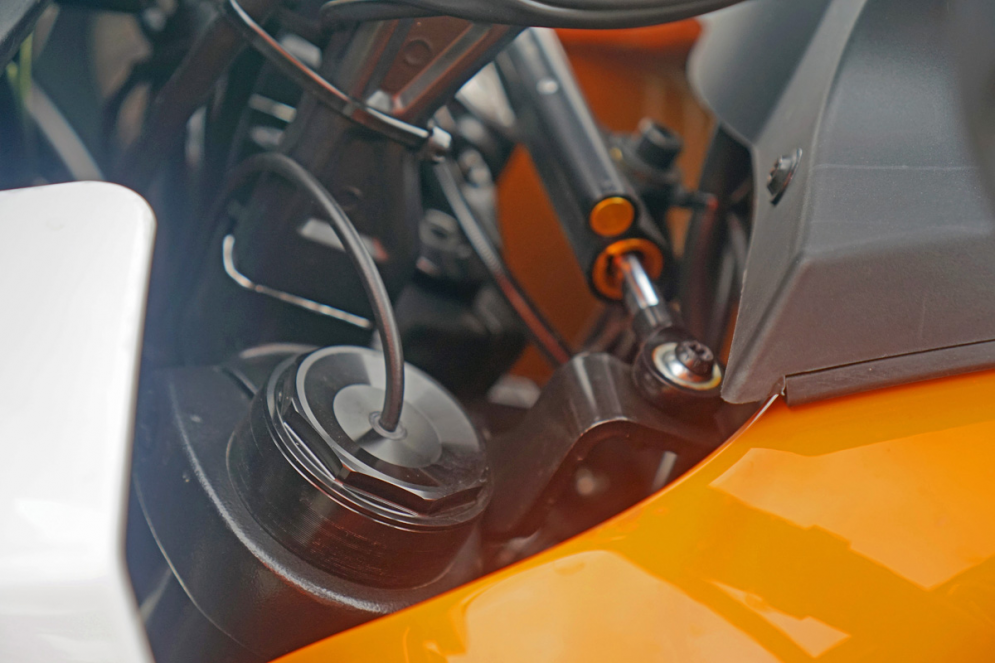 The Harley has a trick or two of its own here. The V-twin engine is taller and the bike feels top heavy, but this is made up by its narrower girth. Another plus is the industry-first Adaptive Ride Height that lowers the bike when stationary (with engine running) to aid those with a shorter inseam – it goes from the standard seat height of 890mm to a manageable 855mm. 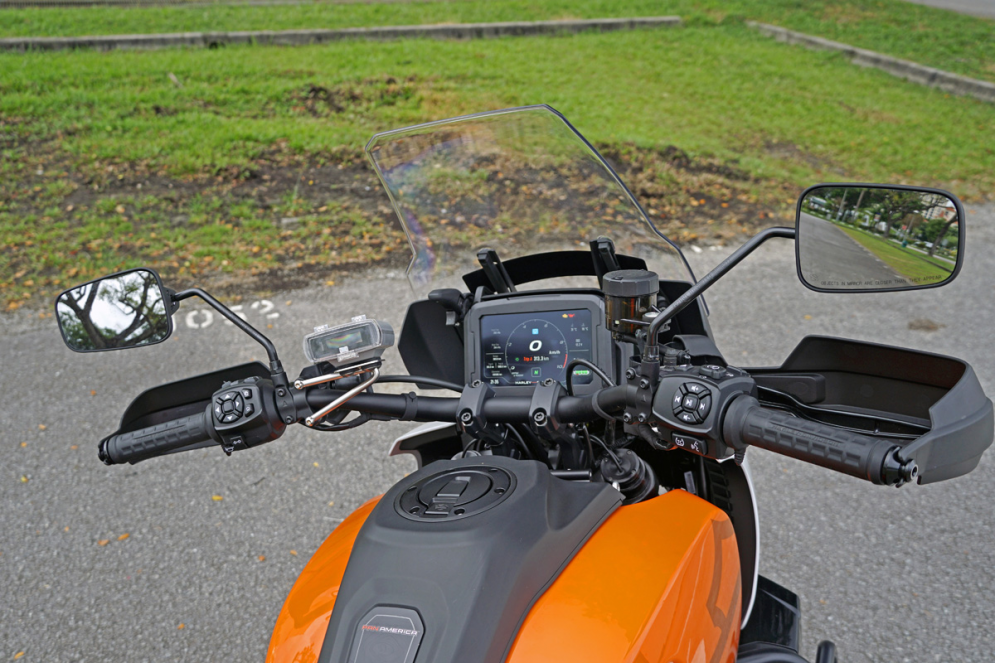 Ergonomics were good, with no major misgivings in our experience. Like a proper adv-tourer,  the 1250 Special offers a commanding riding position. The windscreen – adjustable with one hand – is effective too.

The big, burly America makes a decent commuter too, with  just a bit of heat on the right ankle in stationary traffic. Pushing and parking requires lots of muscle, typical of a big adv bike, but deploying the main-stand was challenging, as the bike lacked a handle or grip point. Fortunately the “self locking” side stand was reassuringly secure. Waiting at the traffic lights, I could put both feet firmly on the ground, the self lowering electronic suspension doing its thing and reducing seat height by 40mm. 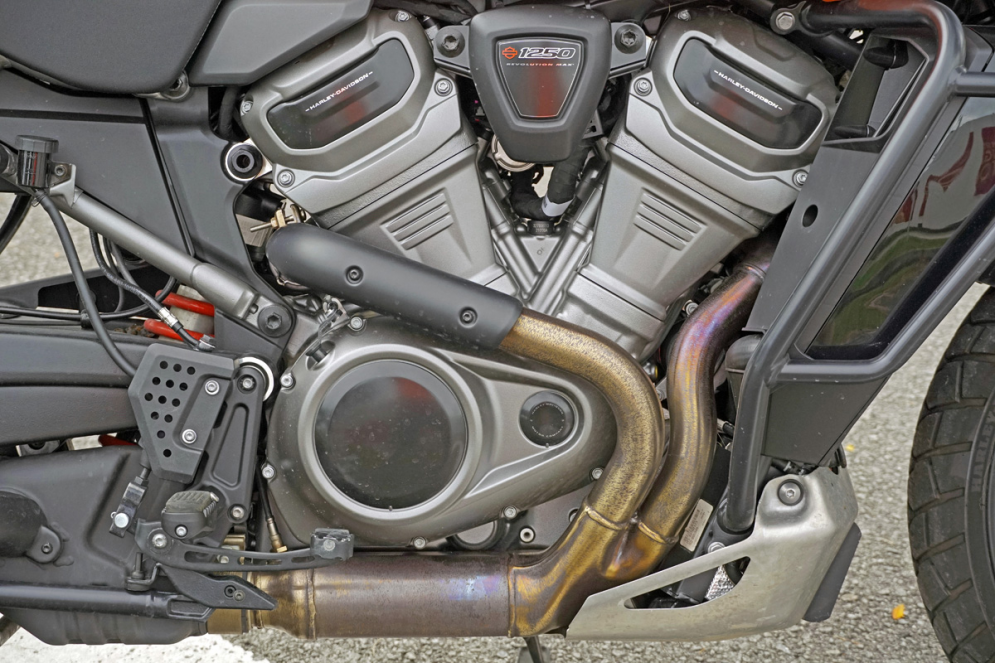 Since time immemorial, Harley have been known for engines with big cubes, high torque, and relatively low power. The new Revolution Max 1,252cc V-Twin engine changes all that with an eye-opening 150hp and 127Nm of torque. 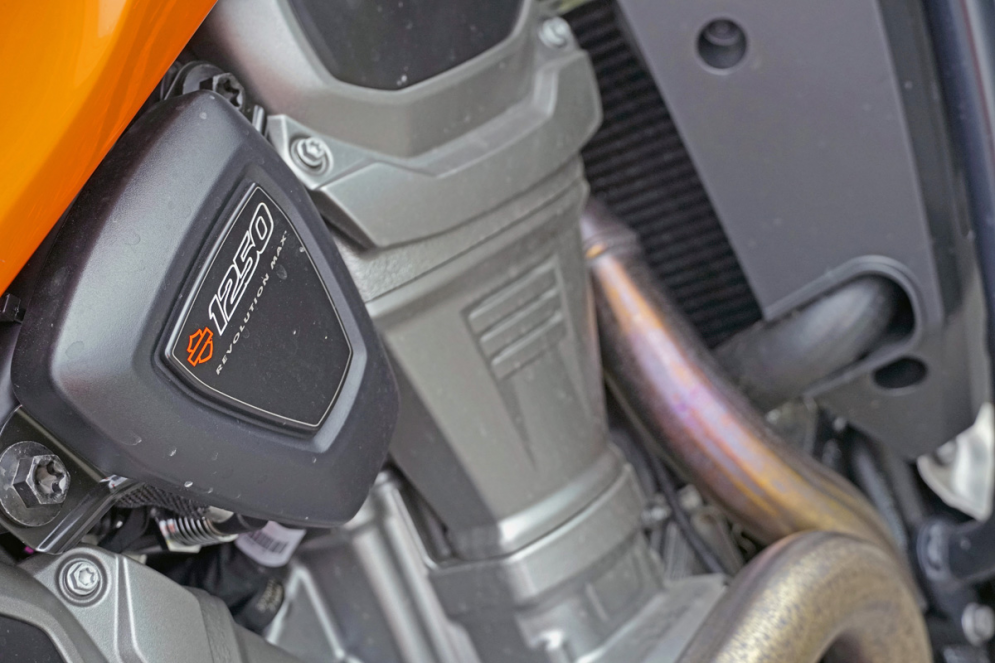 It’s an impressive powerplant and very un-Harley. The the fly-by-wire throttle provides linear throttle response at almost all speeds, with no noticeable flat spots through the rev range. The strong torque from low revs mellows into a constant shove from 5,500rpm through to redline. Eyes closed, you might mistake it for another orange-tinged V-twin adventure mill.That full 150hp is unleashed in Sport mode, and it feels what it claims, giving more on-road oomph than what’s typically found in bikes of this category save the Ducati Multistrada V4. Impressively, the engie felt smoother at higher revs, unlike most big capacity two-cylinder bikes.So far, so un-Harley.  A gripe that Harley diehards might have is the stifled Euro5 exhaust note, that whilst audible, lacks the baritone blast that 114 cubic inches might imply. 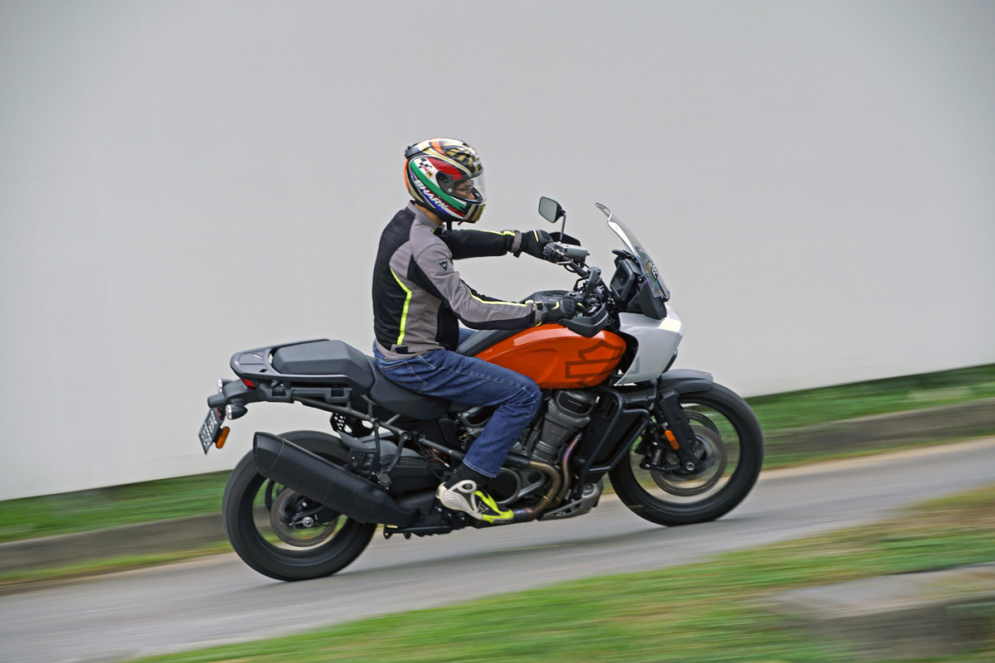 For those planning the inevitable adventure after restrictions end, the Pan Am should be able to drink non-premium gas too. Harley boasts that the 1250 only requires 91 RON fuel (like back home) so it should have no problem where the fuel is of lower octane rating. On paper it should have (Peninsula Malaysia) coast-to-coast ability, with a claimed 5.5L/100km delivering a theoretical 380km from a 21.2-litre tank. 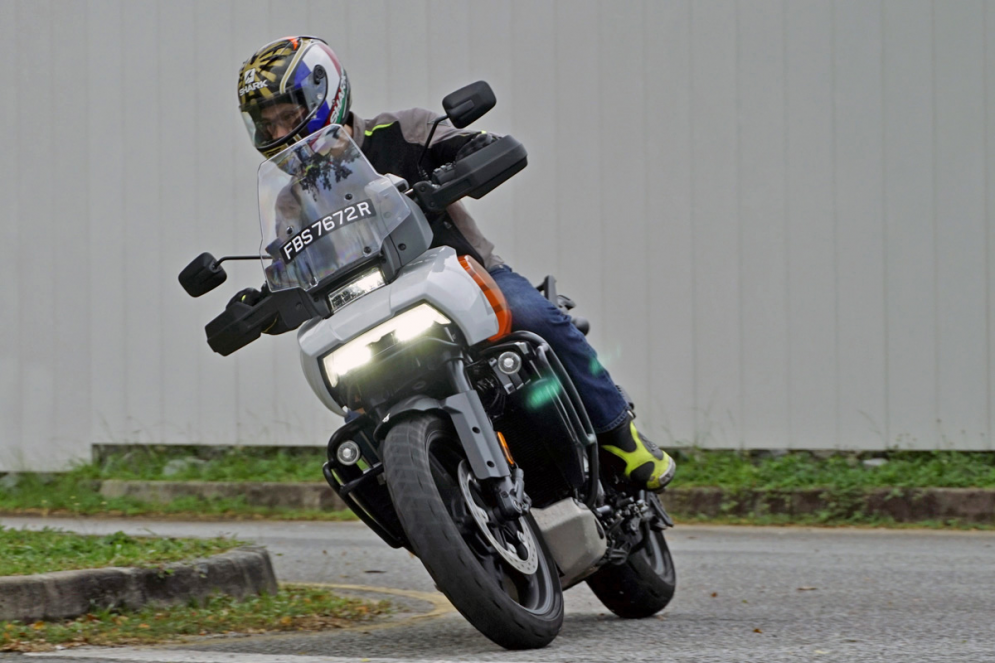 Before testing the Pan Am we were genuinely cynical about its handling – after all Harley has mostly made cruisers and tourers through its long history, XR1200 and Roadster aside.

So we were surprised that it handles really well, and up to par with the Adventure Bike Class of 2021. Bends of all types, from chicanes to fast sweepers and reducing radius corners were negotiated without fuss, the communicative steering responding to inputs precisely. The adaptive suspension is very well setup, steam-rolling speed strips and bumps alike, while the light-action gearbox was precise, with and without using the clutch. 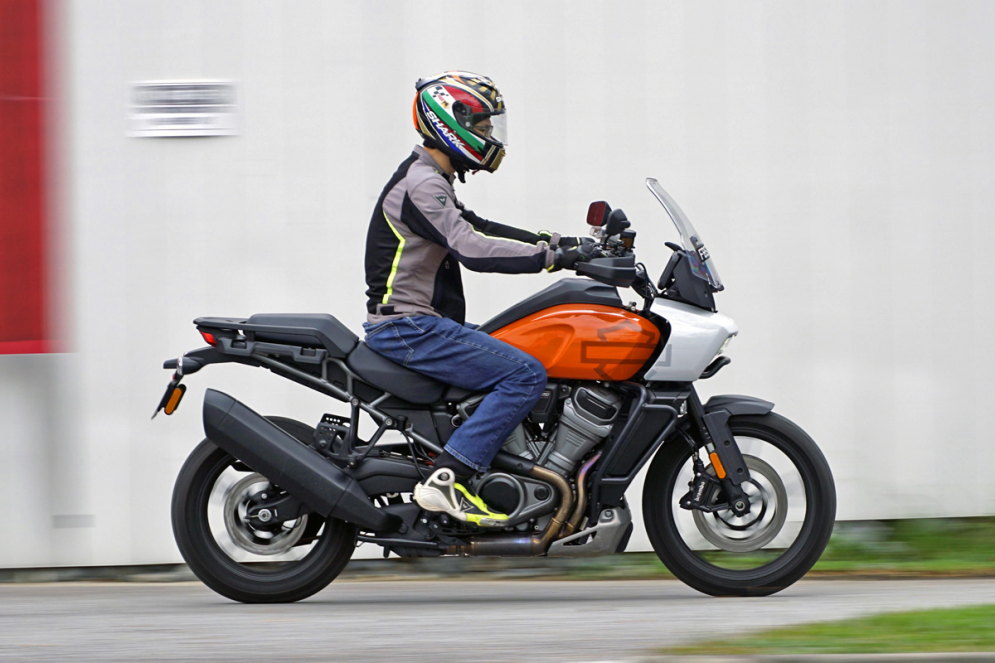 A notable omission here is the lack of a quickshifter, which isn’t even on the paid-for options list, and the busy TFT dash can be hard to read with its tiny text. Our final gripe is that the service intervals of 8,000km are short by today’s standards. Fortunately H-FD says the first service at 1,600km is free of charge, minor service costs S$380 (at 8000km) and major service (at 16000km) costs S$480. 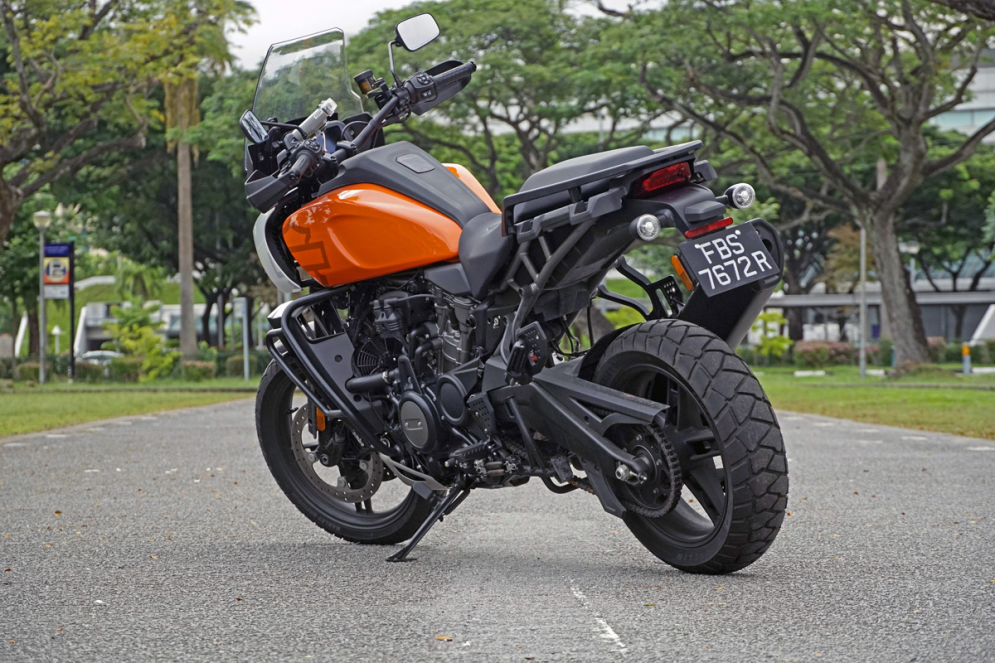 Without doing a head-to-head and going by ‘seat memory’, we’d say the BMW R 1250 GS is still king of the adventure hill, what with its sheer accessibility and capability. It’s down on power over the Harley, but to regular riders anything north of 130hp is really only useful when blasting down the highway at illegal (in Singapore) speeds.

But the Pan Am is a total 180 from Harley, and a very impressive first showing for an adventure bike. It’s not at the top of the heap yet, but it’s not far off. In short, living with America is pretty good. 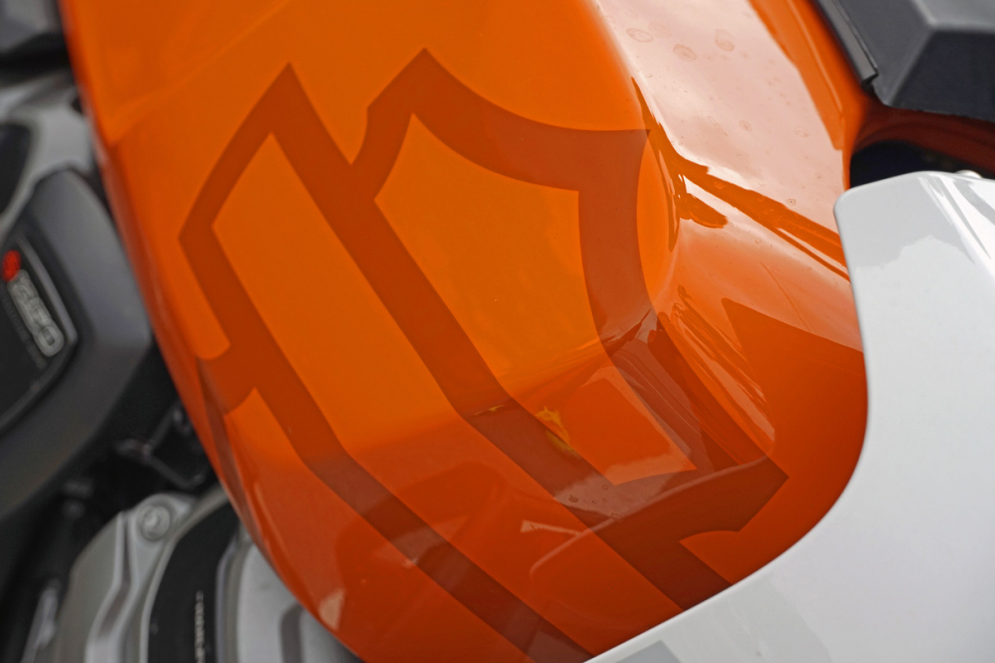