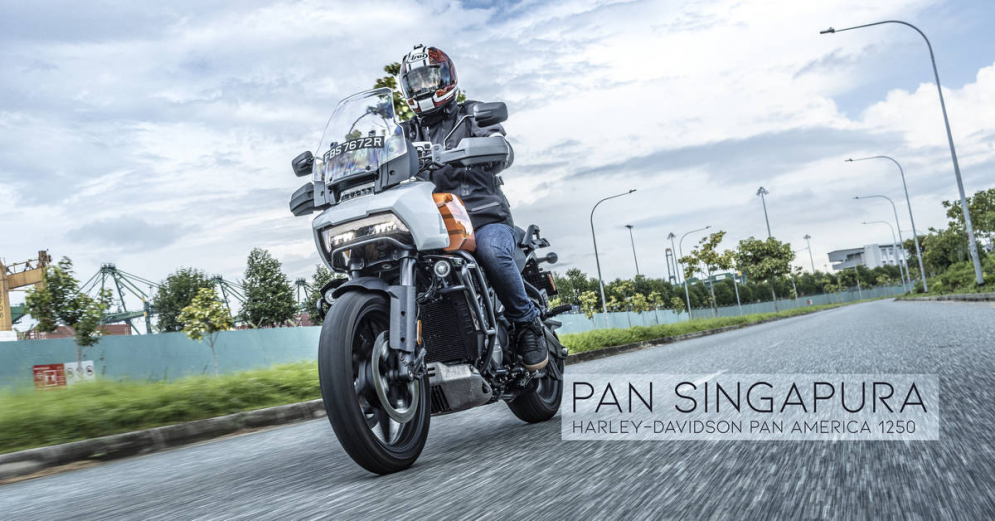 At the Pan America launch a few weeks ago, we got to test ride the brand-new Harley for a short sprint on the road, and to test its off-road capabilities at the Sarimbun Scout Camp. Now, we bring it for an extended ride in real-world conditions on our city streets to see how this go-anywhere, do-anything H-D fares. 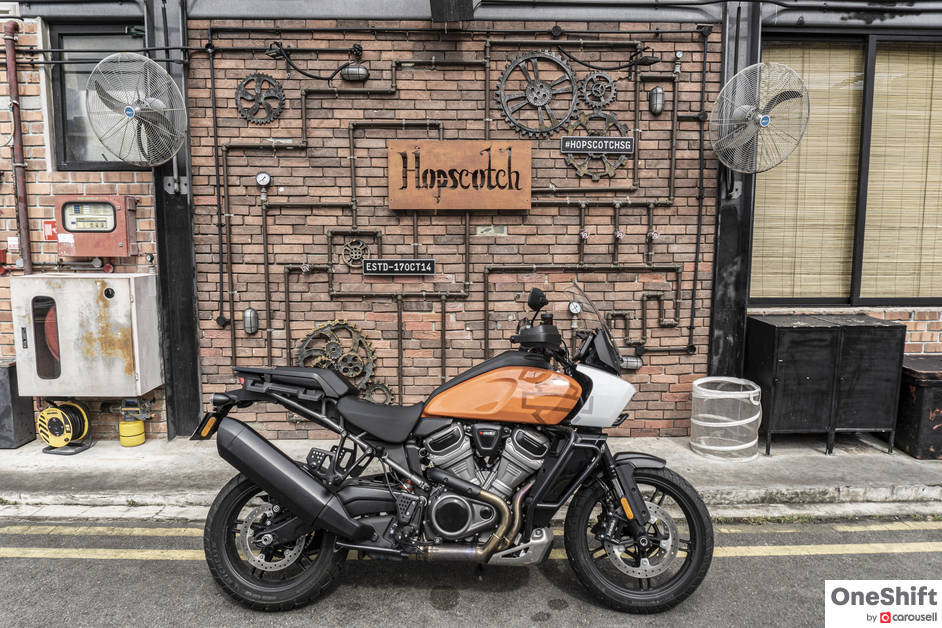 As a quick recap, this is H-D’s first adventure motorbike, a company more famous for its cruisers. It’s a bold move that’s definitely elicited some curiosity, or even worse, criticism from H-D diehards. For those new to the brand like myself though, it’s rather refreshing to see the company innovate and try something new. 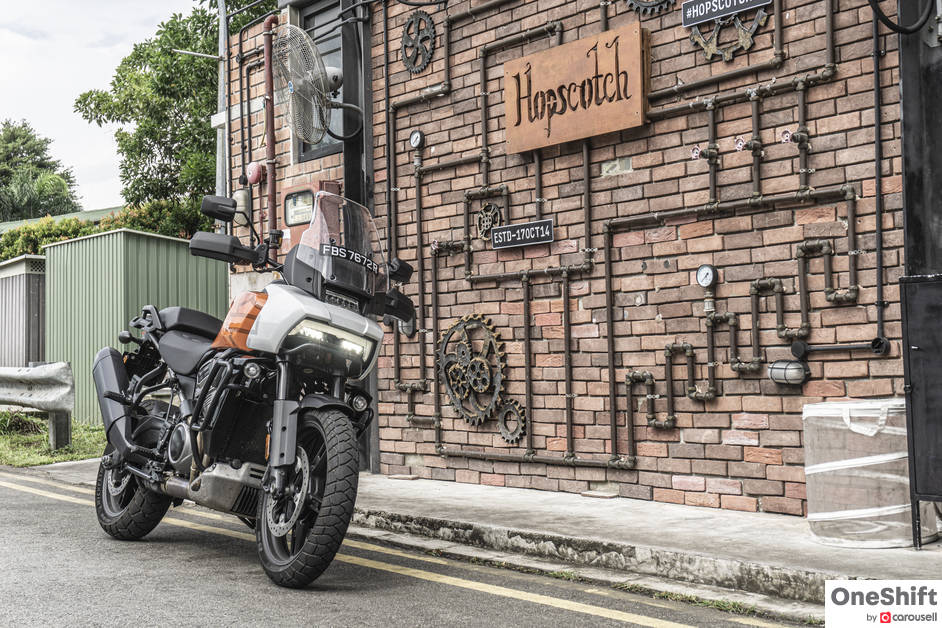 The bike doesn’t stray too far from the typical adventure bike profile, sitting quite high and with large clearances front and rear to allow it to go through any terrain. There is a useful wind deflector and modern-looking headlights up front, as well as a large V-Twin that dominates the side view. It’s a stout, confident look without being overly macho, although it won’t instantly be recognised as a Harley. 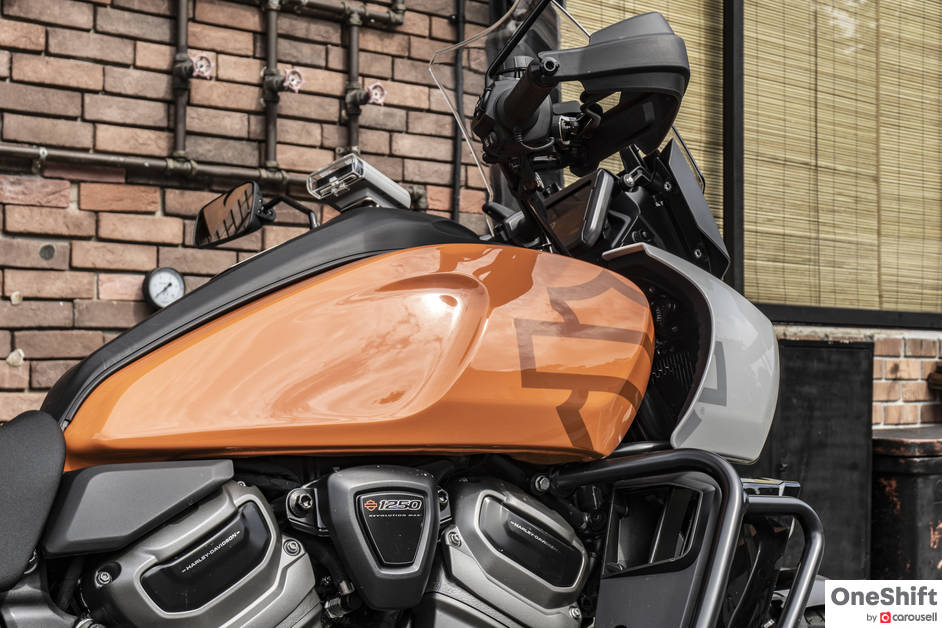 An innovation you’d notice all the time is how the bike would lower itself when it’s not moving (standard on the ‘Special’ trim). So when you’re mounting the bike, you’d find it much easier than you would expect due to a lower saddle height. Once on the move, the bike will raise itself. It’s an ingenious way to make the bike more usable and accessible, but I am not sure if it would be an expensive fix if it goes wrong. 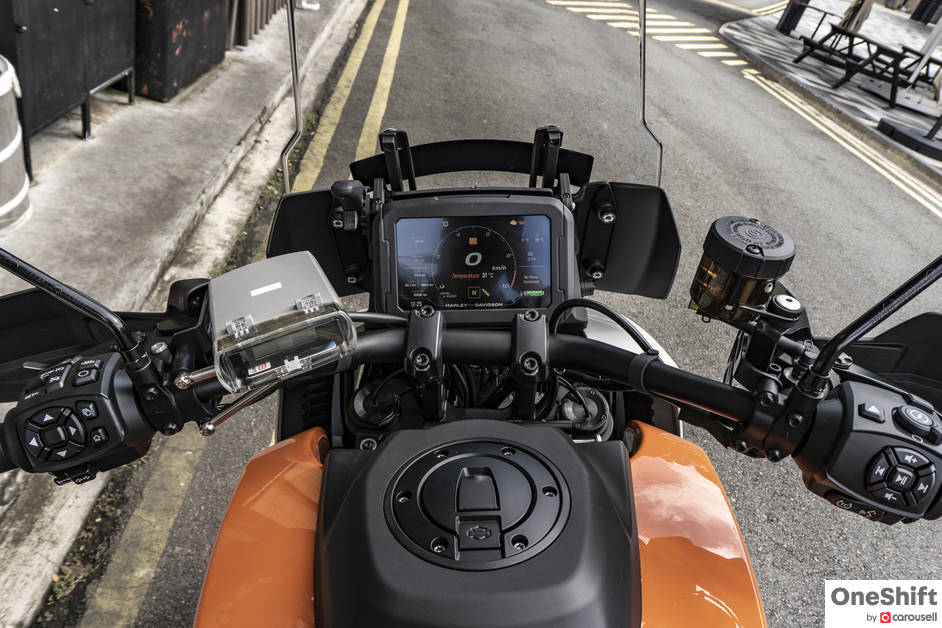 The rider takes on an upright posture on the Pan America due to the highly-set handlebars, which gives a commanding view of the road ahead. There is a high-resolution screen from which you receive all of your vital information as well as to make various setting adjustments. The Pan America is a technology tour de force but it manages to keep everything easy to use; the on-screen graphics are crisp and the UX is surprisingly well-sorted. One small annoyance is the turn signal button, which is not very intuitive especially when wearing gloves. 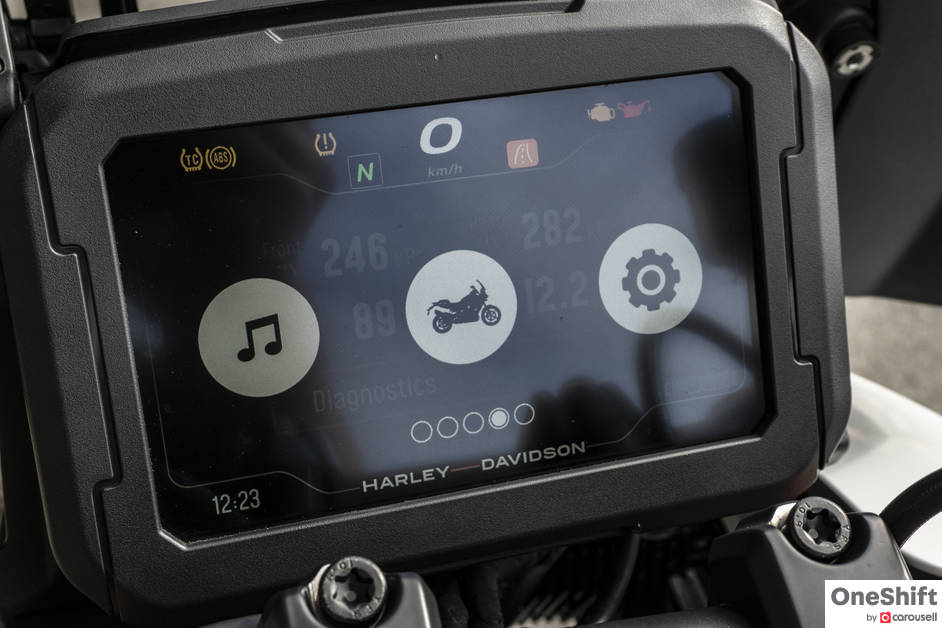 The Pan America is using an all-new 1,250cc V-Twin that boasts low-end torque as well as high-end power. In practice, it is very well-suited to the grand touring personality of the Pan America, offering plenty of power on tap in the low to mid range. It’s not particularly rewarding to wring it out to the redline in terms of power delivery or sound, so I’d just ride it in its sweet spot which is in the lower part of the rev range. 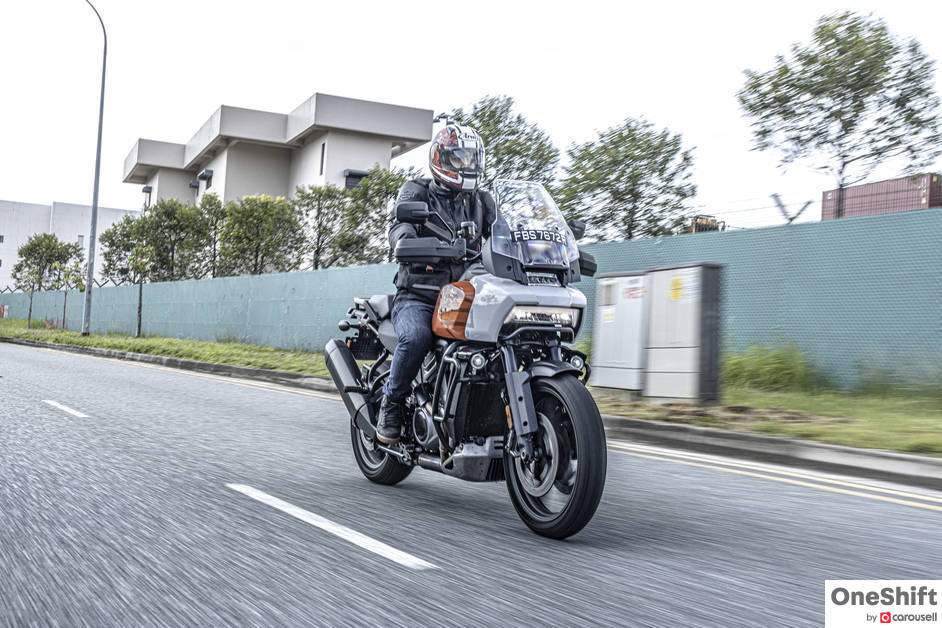 For the urban grind, the Pan America takes it all in its stride. Its generous ground clearance and well-judged damping gives an effortless riding experience, allowing humps to be conquered at speed and softening out most harshness from uneven road. Wind buffeting is also kept a minimum at highway speeds, allowing a rather relaxed ride. Only in traffic jams do you notice the heat of the engine dissipating near one’s thighs, which can be a bit uncomfortable if one is not properly attired. 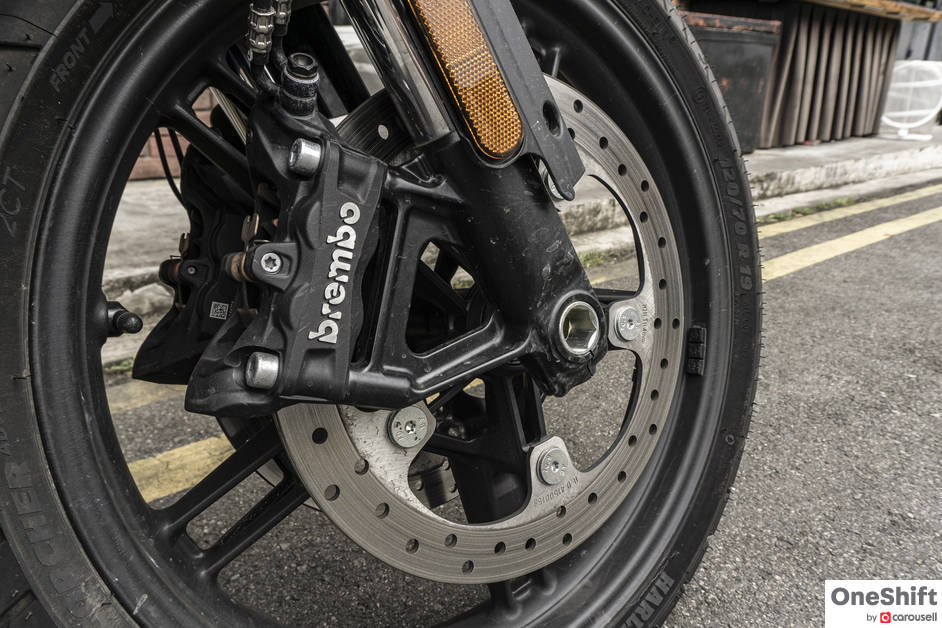 On a late night ride, I got to bring the Pan America along some twisty back roads. The bike definitely feels large and a bit out of place going quickly at bends, but it is capable and in Sport mode, would give some semblance of sportiness without feeling like a cumbersome adventure bike. In fact, for its size, it is uncommonly agile and not at all heavy, feeling like a much smaller bike than it actually is. That said, it is much happier being on the open road cruising. 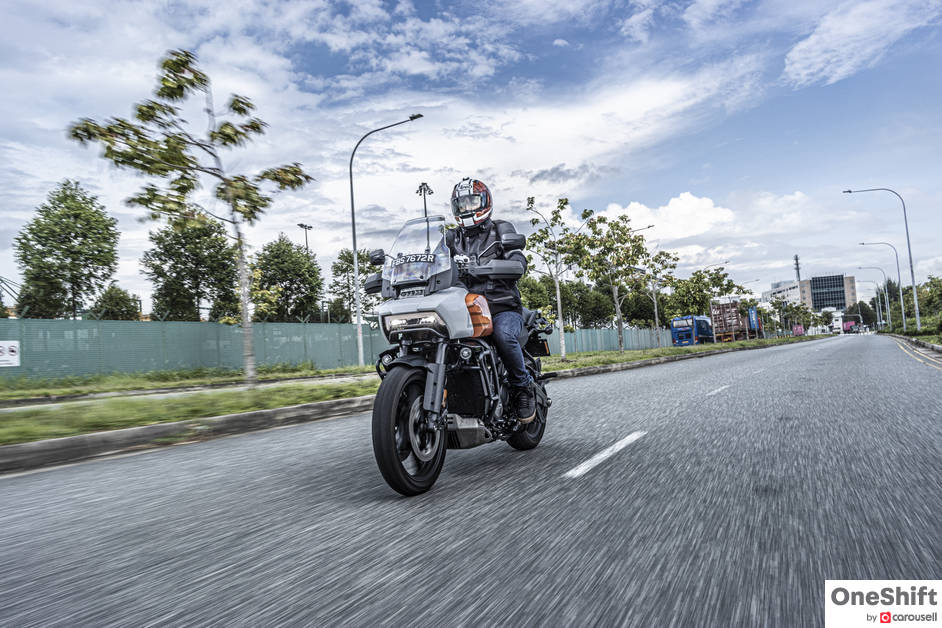 Our ride on the road confirms our thoughts that the Pan America, as a first attempt at an adventure bike from H-D, is quite an achievement. It really fulfills the brief and puts forth a compelling case to the venerable BMW GS. However, its lack of association with the H-D brand’s well-loved, and well-worn, values may be the Pan America’s biggest hurdle to cross.

A thoroughly engineered bike, you would think H-D has been making adventure bikes for decades. It rides excellently, has a modern and grunty engine, and is sophisticated with a host of features and technology to justify its price. It handles cleanly and predictably on-road, too.

There is too much heat going to the wrong places especially in our blistering climate. Turn signal controls can be more intuitive.

If you’re after an adventure bike, having one more option to choose from wouldn’t hurt, especially when it is this good. Not Harley’s typical game, but it has played it well.