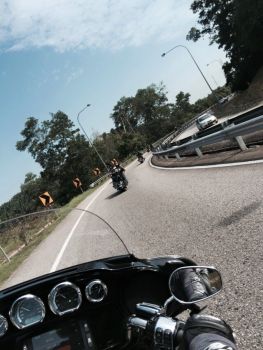 On the 27th of July 2015, Harley-Davidson of Singapore (HDS) organized a Softail family ride to provide owners a different experience. Meeting at Petronas, Gelang Patah as early as 8:45am, proud Softail owners streamed in with big smiles on their faces. James Tan, Sales Executive of HDS who was also the road captain for the ride, provided a quick introduction of the HDS team and most importantly conducted a safety briefing before the ride.

The ride rumbled-off at 9:30am starting from Gelang Patah via North-South Highway, Sedenak, Jalan Potian and a water break at Pekan Nanas. This specially designed route includes a mix of highways and windy B-roads for participants. With safety being the top priority, we witnessed James leading the pack in a staggered riding formation while the rest of HDS staffs assisted playing the role of side marker and sweeper.

After the thrilling ride, we ended up at Bob's Kitchen for the much-awaited lunch. Everyone was hungry and a scrumptious meal was served. During the meal, Mr Willy Low, Sales Manager of HDS addressed the crowd with a warm-hearted speech emphasizing that we are sharing a lifestyle and the joy of riding, hence encouraged all riders to chill at HDS regularly.

HDS would like to thank those who joined this event and welcomes others forfuture rides.